The Shoot for the Stars award Jacqueline Mc Kenzie,  furtherest ride till the night “less then 30 km”. Trucking it out through the night on a pretty heavy touring bike, awesome!

The Shoot for the Stars award 2 Seth Shaunessy, also having only ever ridden 30km before

The Shoot for the Stars award 3 Harry Charlesworth, while he has done some longer rides before he’s the youngest finisher at 15 and may in fact wind up being a star !

all courtesy of Treadle.

The award for Courage – to the rider on the most inappropriate bike- wins a set of Ortlieb Panniers courtesy of Metro Cycles, Newcastle.

Josh Reinhardt and Ed Sheldon have the prize… 172km with some significant hills is quite a long way on a track bike without brakes…..  Quite how they will mount the panniers will be interesting to see.  At least they can share the prize easily by taking one each.

The award for Perseverance – to Partha Susarla who was last to arrive in Newcastle Baths- Wins a large Zimbale Saddle bag from Cheeky Transport, Newtown. 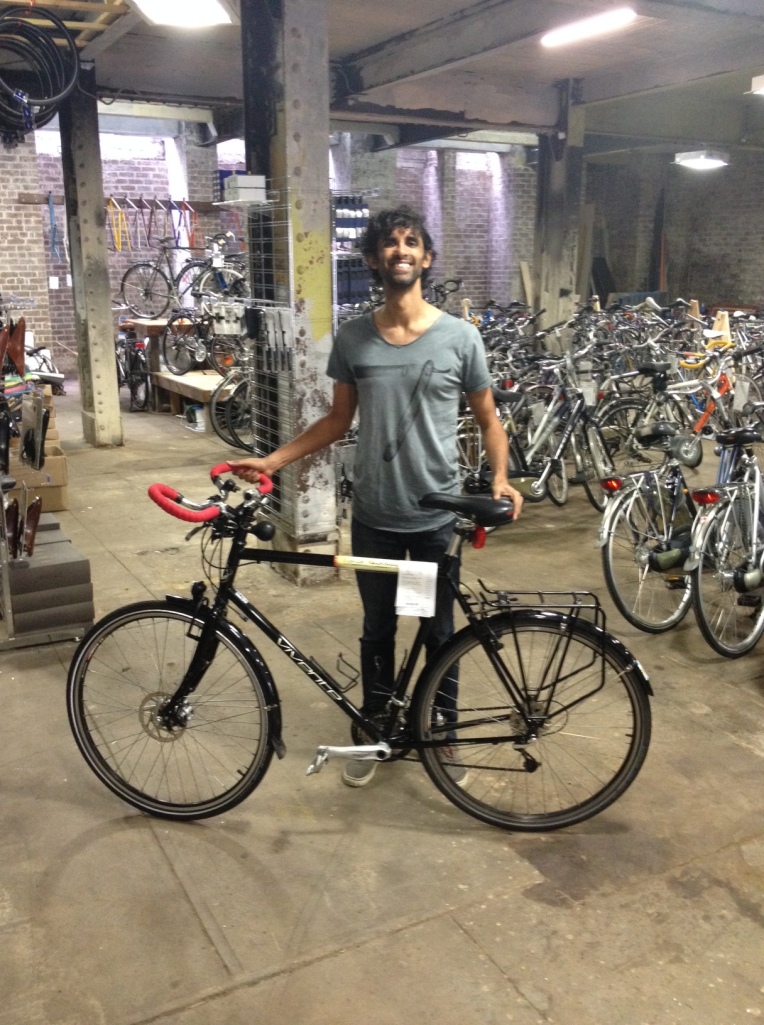 Photo: Partha picking up his repaired bike, including new fork from Omafiets in Redfern.

Paratha finished despite the fact that he took a fairly high speed tumble about 50km into the ride. The crash left him rather bruised, battered with a wobbly front wheel a bent front fork and no front brake. Despite being quite close to a train station and being counselled by other riders present to head home he decided to instead finish the ride.  Riding another 125 km like this makes him absolute champion and a very worth winner of the award for Perseverance!

Partha arrived at 10:30, so 13 1/2 hours riding.  You may have seen him on the night riding a Vivente Touring bike with a full size floor pump sticking out of a pannier. What a legend!

The award for Camaraderie – to the rider who most graciously aids another in their hour of need- Wins a Pair of Vaude Rain Jackets from Omafiets Dutch Bicycles, Redfern.

Chris from Omafiets was nominated for helping with a puncture within seconds of the start. Nick from Cheeky transport was also nominated for apparently pulling tools from inside his Brompton to help another rider with a fix at Mt White. Both are excluded form the competition for the dual reasons of being professional mechanics and event sponsors. But it does just go to show how nice our sponsors are, offering prizes, recruiting riders, riding themselves and lending a hand. We couldn’t make this stuff up if we tried.

But ultimately the prize goes to Mike and Roger Webber, two brothers from Sydney riding together on a pair of extremely well equipped bikes. Mike and Roger were at hand both times other riders came off their bike (we know of only two incidents, Partha’s as above and another more serious one involving at this stage a still unidentified rider later in the ride), at both sites they were immediately involved in rendering aid, and making sure the scene and other riders were safe. Will this seems rather bad luck for the two of them it seems little to have damped their enthusiasm for the ride and they finished the ride in great spirits. For their impeccable timing in rendering aid at both incidents and good cheer we think they are well deserving of the prize for Camaraderie!

Oh yes, one more thing, our volunteers who ran the tea stops, checked people in, stayed up late, drove people home end generally looked after us all deserve all our thanks. Thanks also to Jessy Rye our experimental mobile motorcycle mechanic, who cruised till the wee hours checking in on riders having problems. Very many of you have sent really heartfelt thanks, too many to fwd on and there has also been a bit of talk about which tea stop was best.  Last year the Gong went to Budgewoi, chiefly because of the proper coffee and homemade cake, Mt White have responded with homemade cookies and slices, though the plunger coffee was still a bridge too far..

Anyhow great thanks to Tracy and Cathy Hoven, Victoria Bond, Lucie Loane and Natasha Davies at Mt White and a rather outnumbered Bernard Hockings at Budgewoi.